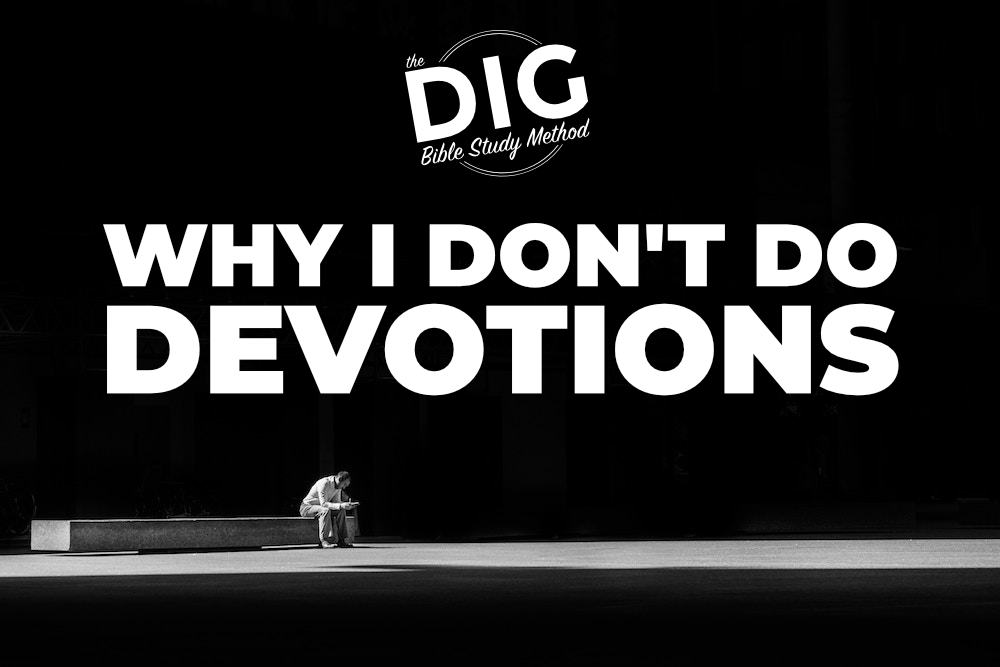 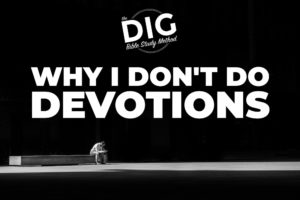 As we sat at a round table my college’s cafeteria, our  Old Testament Bible professor asked, “Can I tell you a secret?” The handful of young men at the table, myself included, nodded and huddled in close to hear the juicy information about to be revealed.

Slowly and confidently, he quietly stated, “I don’t do devotions.”

There was a collective gasp from the rest of us. How could this be?!

My Life Was About to Change Forever

My world was spinning for those next few moments.

Growing up in a Christian home, attending Christian school, traveling on mission trips, going to church camp and faithfully showing up to youth group — such a statement was counter to everything I’d ever heard!

I was certain this was a reckless admission to make in front of Bible college students.

This got me thinking: just what are devotions? Generally speaking, it meant to set aside solitary time each day — no less than 30 minutes and before the sun comes up, if you are a good Christian — in studious reading of Scripture and knee-bent prayer.

My understanding was, if you were a Christian, you were to do devotions. Who taught me this? Not a singular person, but it was a pervasive expectation of the American Christian subculture I grew up in.

And now a bigger question: Who was right?

Were devotions something Christians were to do? Or was this man at our table correct in not doing devotions?

Something Greater Than Devotions

Our professor continued. “I read the Bible — the texts — as often as I can.”

Okay, I guess that’s a pretty good thing, I thought.

“Then, as I walk down the street, I’m thinking about the text,” he said. “If I’m on the bus, I’m pondering the text. As I fall asleep at night, I’m meditating on the text.”

I was struck with jealousy. Not a breaking-the-Ten-Commandments kind of jealousy, but our professor revealed an intimacy with God through a constant devotion to Him and His Word. And I desired the same in my life.

My devotions had become a checklist, a law unto myself, and an acheivement-based religiousness that neither impressed God nor led to an actual deepening of my faith.

Our professor revealed an intimacy with God through a constant devotion to Him and His Word. And I desired the same in my life. I was merely attempting to do what Christian culture had told me to do. Even then, I wasn’t very good at it. I hated getting up early in the morning, especially to do something heartless.

Have you had the same struggle? Or do you even currently? Would you be willing to share your struggle in the comments below? I’d like to hear from you if you identify with the feeling of duty as it relates to Bible reading, to praying, or actions with the label of “devotions.”

The Lord was revealing to me the distinction between devotion and devotions. My devotions lacked devotion. And devotion to what?

Or rather, devotion to who?

Take a look at the following two passages — one from the Old Testament and the other from the New Testament — describing God’s chosen people and their devotion.

As Israel was called into covenant relationship with God, He told them to take His Word to heart — all their heart. That is, He told them to be devoted to Him and His Word.  God mentions moments of daily life to remember His Word, but He wasn’t intending for it to be limited to those times.  It was to highlight their absolute devotion to Him within relationship.

From the New Testament…

And they devoted themselves to the apostles’ teaching and the fellowship, to the breaking of bread and the prayers. And awe came upon every soul, and many wonders and signs were being done through the apostles. And all who believed were together and had all things in common. And they were selling their possessions and belongings and distributing the proceeds to all, as any had need. And day by day, attending the temple together and breaking bread in their homes, they received their food with glad and generous hearts, praising God and having favor with all the people.
– Acts 2:42-47a ESV

The account of the newly created church in Acts even uses the word devoted. The complete picture indicates their devotion sprung from and toward God, and their devotion compelled them to follow with actions in every aspect of life — individually and communally — with hearts overflowing in relationship with Jesus.

They were consumed with Jesus. He first loved them. They loved Him back.

Their devotion sprung from and toward God, and their devotion compelled them to follow with actions in every aspect of life — individually and communally — with hearts overflowing in relationship Jesus.As I consider relationships, especially my marriage with Katie, I know making conversation or performing deeds out of duty are not what she desires. However, those daily deeds and opportunities are much better received when done as an outflow of my heart’s devotion.

I remember one time I said to Katie, “I love you.”

That is normally a good thing, but she responded with a befuddled look, “What was that?”

She was right. I had said the right words with the wrong heart. Sure, she wanted to hear the words I love you come from my mouth, but also from my heart, from my devotion.

It sounds similar to this portion from Isaiah 29:13 where God says…

“…this people draw near with their mouth and honor me with their lips, while their hearts are far from me, and their fear of me is a commandment taught by men…”

Oh, how I desire to be devoted!

So Then, Don’t Do Devotions?

I can almost hear the emails landing in my inbox: “So then, are you telling us not to do devotions?!”

If you are doing them out of duty, then yeah, stop!

Listen to what David says in the Scriptures:

When done from religious legalism, devotions are not what the Lord desires. He desires a broken spirit…a spirit surrendered to Him in repentance and devotion. This will lead to a true love and desire for His Word.

If you are doing devotions out of devotion, then your devotions need to be integrated into every moment of your life. Walking down the street. Sitting on the bus. Laying your head on your pillow. Waking up before the sun rises.

Yep, you may need some anchor points in your daily schedule to be in the Word. For me, it’s late at night, when everyone else has gone to bed and the house is quiet. But what’s important during these times, and the whole of your daily schedule, is to be devoted, always giving Jesus an “open ear” to His Word.

Ask Jesus to Dig Out Your Ears

Psalm 40 spoke of giving God an “open ear.” The Hebrew literally says ears you have dug out for me. Who wants us to be devoted and listen more than Jesus? He knows our ears get plugged with the dirty gunk of sin and every day life.

Ask Jesus to dig out your ears so you can hear His Word.

Consider using the DIG Bible Study Method as a simple tool to help dig deeper in the Word with Jesus.  It’s not the only way to approach the Scriptures, but I have found it helps train my heart to carefully listen to Jesus’ Word, to draw near to Him and to grow in my devotion.  Follow this link for a quick overview and see if it might be something helpful for you, too.